Do It Right, Win A Night

To continue our efforts to encourage the use of Designated Drivers we will award one driver a free night out in a limousine. Drivers and passengers can take a simple online pledge to either be or use a Designated Driver this holiday season to be entered to win. The promotion is titled “Do It Right, Win A Night!” and has been offered since 2012. There is no cost or purchase to make the pledge.

Supported by the 28 participating Hingham establishments, the Designated Driver Program in Hingham runs year round, however, this promotion targets the busy and dangerous holiday season. This pledge promotion runs just before Thanksgiving through New Years Day when people are attending holiday related parties and functions.

A Designated Driver is someone who agrees not to drink any alcoholic beverages that evening and to safely transport home those who have been drinking. It does not mean at the end of the night that the “most sober” or the “least drunk” person be designated to drive.

The promotion starts November 15 and ends January 2 of each year. You can take the pledge now. Upon submitting the pledge, the person is automatically entered to win the limo night out. The winner will receive a four hour night out in an 8-10 passenger limousine. A winner will be randomly selected by January 4th of each year. The limousine night out is again being donated by A Plus Coach, Inc., of Hingham. Police will also pay the gratuity,

The promotion is open to anyone 21 and older in Eastern Massachusetts and not limited to Hingham residents. It is open to staff of the restaurants and even town employees, with the exception of the staff of the Hingham Police Department and their immediate family members.
It’s a simple act that can last a lifetime.

Congratulations to the winner of our "Do It Right, Win A Night" online pledge, Victoria Le Blanc of Norwell. She was randomly selected from those who took our online pledge to be or use a Designated Driver.

She won a free 8-10 passenger limo night out, donated by A Plus Coach of Hingham (from left, Deputy Chief David Jones, Victoria Leblanc and Chief Glenn Olsson).


Thanks to all who took the pledge. 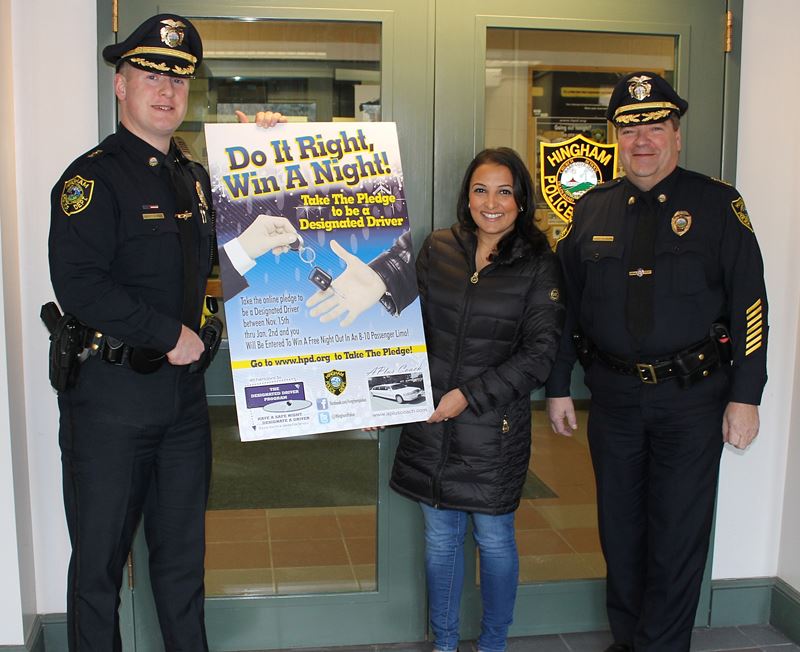